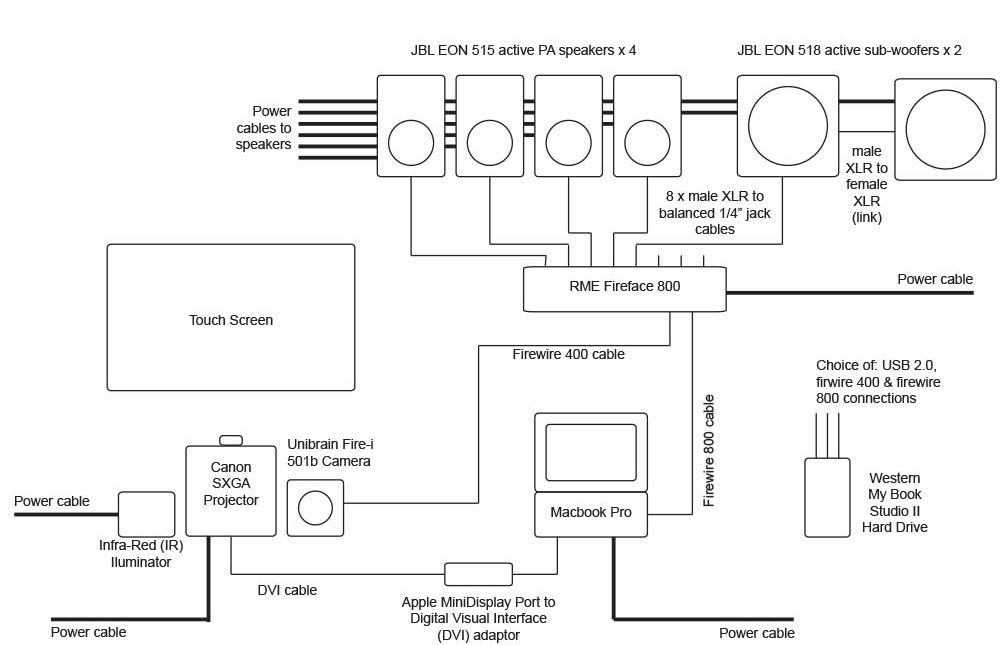 It has been designed to be highly expandable, portable and to adapt and grow with current and emerging technologies. It currently offers a 2.8kW, 4.1 Ableton Live based surround sound system with a 1600mm x 3200mm Infra-Red (IR) touch screen interface with 2 Tera-Bytes (TB) of external data storage suitable for use in a wide variety of performance spaces for audiences of up to approximately 200 people. Figure 1 shows the connections between the various hardware components of the system. In order to compensate for the MacBook Pro only having one firewire 800 port (Apple Store UK, 2011) the Uni-Brain firewire camera is connected to the RME audio interface, utilising firewire”s ‘daisy-chaining” capabilities. The second sub-woofer speaker is connected to the first sub-woofer via the speakers ‘link” connection, effectively passing the original signal on o the second speaker from the first. Also, note the three ‘spare” outputs on the RME audio interface allowing for future upgrades to a 5.1 and 7.1 surround sound system. The external hard drive, available for additional storage and backups has a choice of 3 connections (usb, firewire 400 and firewire 800) thus this can be connected to the MacBook via usb and the RME interface via the remaining firewire 800 port when the system is set up, or directly to the MacBook via firewire 800 prior to setup or when the system is dismantled. Figure 2 shows the proposed design for the touch screen interface. This will be a custom made metal frame structure to house the acrylic sheet, laptop, camera, IR illuminator and digital projector. The design ensures all items are placed near at hand for ease of use and are positioned correctly in order for the touch screen to operate as outlined in Reactivision 1.4 (2010).

Currently, due to the limitations with the Sominitec Surround Panner max for live device. I am restricted to a 4.1 surround sound system. It would also be possible to attempt to upgrade this device myself if an upgrade wasn”t forthcoming, using the existing device as a template to do so. It has been distributed under a creative commons ‘Attribution-ShareAlike” license (Creative Commons, 2010) which permits the copying and re-editing of the device, and use within a commercial environment as required. It is entirely possible that, through minor software upgrades and equipment additions, eventually this system could be built to be as big or as small as desired. There are three remaining outputs available on the RME audio interface which would enable an upgrade up to a 7.1 system. The RME interface can also be ‘daisy-chained” to include up to three of these units in total (RME, 2010) which would provide 24 analogue outputs. In the meantime although the 4.1 surround system offers limited spacialisation it does extend the possibilities of a standard Ableton Live setup (which currently offers no surround sound features at all). Also, it is hoped that the ease at which sounds can be positioned within the space using the touch screen x-y pad should make for significant surround sound and spatial effects. The specified JBL speaker and stand system allows for multiple mounting and positioning options which would prove useful for ensuring optimum acoustic and sound diffusion characteristics when setting up this system in different locations and venues. Also, either one or two of the sub-woofers can be used as is appropriate for the size and acoustical characteristics of the performance space. 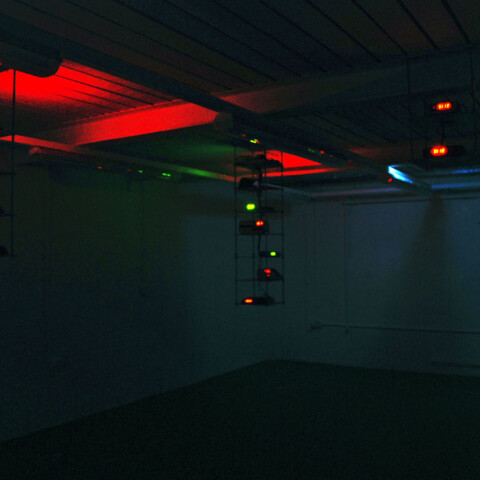 Radio News is a site-specific art installation consisting of approximately twenty digital alarm clock radios. (depending on the installation space). The radios are arranged into suspended columns of differing heights, and receive transmissions containing individual words cut from the latest global financial news headlines. These words are spoken by a remote synthetic voice and broadcast at randomly generated frequencies via a digitally controlled FM radio transmitter. This results in a frequency controlled three-dimensional sound diffusion system, where synthetically… read more 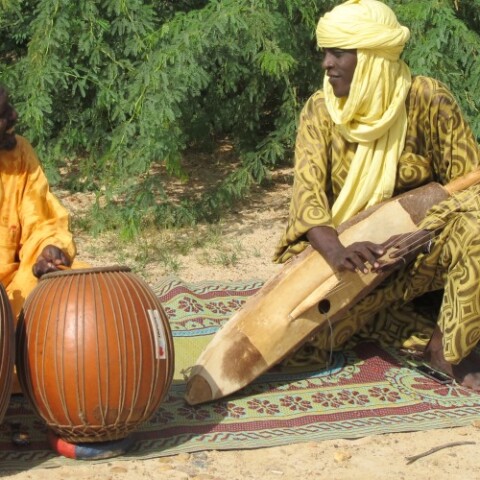